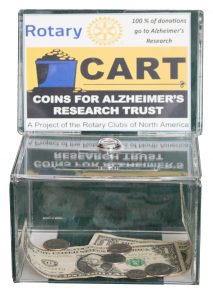 The CART Fund provides funds for cutting edge research to cure Alzheimer’s disease.  CART started in 1996 with Rotarians voluntarily emptying their pockets and purses of change at weekly meetings.

One hundred percent (100%) of donated funds go to cutting edge Alzheimer’s disease research. As of May 2016, the CART Fund has awarded $5.8 million dollars in 34 grants to recognized US research institutions. All administrative expenses of the Fund are paid from interest earned from invested contributions.

The Fund is governed by a Board of Trustees composed of representatives from the Rotary districts that support the program. It is a 501(C)3 organization, Federal ID #31-1466051. The Fund is chartered as a nonprofit organization under the laws of the state of South Carolina. 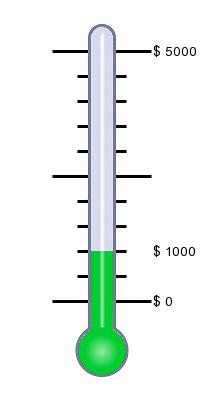 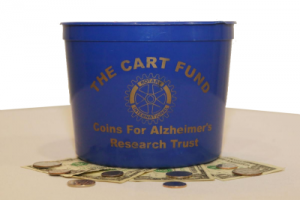 The Genesis of CART

In October 1995, the Sumter, S. C. Rotary Club, led by Roger Ackerman and Dr. Jack Bevan, initiated the effort to prove that Rotarians voluntarily emptying their pockets of change for a good cause could produce significant levels of funds to support Alzheimer’s disease research. The CART Fund (Coins for Alzheimer’s Research Trust) was the name given to the project, which proved to be highly successful during an 8-month testing period.

In May 1996. The CART Fund was introduced at the Rotary District 7770 Conference and was enthusiastically received. The District leaders agreed to adopt CART as a project, if a committee made up of Sumter Rotarians could obtain the support of the individual clubs in the District. During the 1996-97 Rotary year, CART programs were presented in 62 of the 68 clubs in D-7770. The response was overwhelmingly in support of this grassroots project and the district officially adopted CART as a district-wide program in 1997.

The Concept of CART Grows!

The CART Fund was developed with the idea of accomplishing its goals without conducting fund raising projects and without interfering with other projects of Rotary clubs. In order to do this, CART leaders developed the concept of asking Rotarians to voluntarily empty their pockets of change or whatever amount they wanted to donate when they attend their weekly meetings. (It is estimated that on any given day in America, $8.25 billion in loose change passes among our citizens.) This provides a very simple, painless and effective way to raise much-needed funds for Alzheimer’s research.

However, as time has passed, numerous clubs have contributed a portion or even all of some of the proceeds of club fundraisers to CART. Many Rotarians contribute dollars as well as pocket change. Quite a number of clubs have members make challenge gifts on a monthly or quarterly basis. These can amount to $100.00 to $500.00 challenges. A Macon, Georgia Rotarian on two occasions made $5000.00 challenges covering a 4-month period and the Macon Rotarians met the challenge each time!

Many individuals who are not members of Rotary have made significant contributions to CART. In fact, the single largest contribution to CART was made by a non-Rotarian from western North Carolina who contributed $25,000.00 in honor of her two sisters who had lost their battle with Alzheimer’s disease. She said she chose CART because she liked the idea that 100% of her donation was going to research, and because she knew that Rotary was an outstanding organization. Memorials and honorariums have also been a source of funds for CART. Numerous individuals have named CART as the charity of choice for memorials honoring loved ones.

In early January 1999, the American Federation for Aging Research (AFAR) very generously agreed to provide their expertise in assisting with the grant process. Their valued assistance has continued primarily by recruiting some of the nation’s top scientists in the field of Alzheimer’s disease research to serve as a peer advisory group to review all grant applications.

The first Board of Directors meeting was held in November 2000. By-laws were adopted, and PDG Bill Clark of D-7750 was elected President of the Board.

The President of CART may call special meetings of the Board, but most of the decisions are made at the annual meeting held each year in Columbia, SC on the Wednesday prior to Mother’s Day. All other decisions are usually made using conference calls among the Executive Committee members. Each district that joins the CART program has two representatives on the board and two votes. The District CART Chair has one vote and the District Governor-nominee has one vote. All funds are deposited into one CART bank account.

In selecting the best possible recipients for each of our grants, the CART Fund has been fortunate to have the guidance of a 3-person advisory team of renowned Alzheimer’s research scientists who have contributed their valuable time.

Following founder Roger Ackerman, who chaired the first Grants Committee, Dr. Jack Bass served as Chairman of the CART Grants Committee for seven years, and since 2008, Dr. Jim Puryear has carried on this great tradition with distinction.

Currently serving as chairman of the Grants Advisory Team is Dr. John Trojanowski, department head of Neurology and Alzheimer’s research at the University of Pennsylvania. Serving with Dr. Trojanowski are Dr. Allan Levey of Emory University and Dr. Karl Herrup of Rutgers University.

Dr. Sam Gandy served as Chairman of the CART Grants Advisory Team during the time that the first 6 grants were selected for funding by CART. Among the professional researchers serving at various times with Dr. Gandy were Drs. Virginia Lee, Edward Koo, David Holtzman, and George Martin. CART is deeply grateful to these dedicated scientists and volunteers for their guidance and encouragement.

Does a donation to CART help me become a Paul Harris Fellow?
Unfortunately, no. At least not yet. It is our dream to see CART adopted by Rotary International as a worldwide project.

I’m not a Rotarian but I’d like to participate. Can I?
Of course! Go to http://www.cartund.org/cart.donations to make a one time or recurring credit card draft via PayPal. Or mail your donation to:

What does our club need to do to support CART on an ongoing basis?
This choice is completely up to your club. To raise funds for CART, our supporters have hosted music events, run the circumference of the earth, held go-CART races, golf tournaments, dance festivals and more.

Many clubs take a weekly CART collection using CART buckets and challenge local businesses to match. Some clubs designate a portion of a fund-raiser to CART. Some clubs host events that support CART exclusively. Check out CART’s Facebook page to see some of the incredible fundraising efforts of our supporters.

How can my family and I support CART as individuals?
Individuals and family members can go to http://www.cartfund.org/cart/donations/ to set up monthly credit card drafts via Pay Pal. Monthly bank drafts are another option. Many families choose to designate memorial gifts to CART in honor of loved ones.

How much actually goes to research?
100% of your original donation and over 80% of the interest it generates goes to Alzheimer’s research. All board-approved expenses such as the salary of the part-time Executive Director, CART buckets, the annual Board meeting, insurance bonds etc. are paid from interest income earned on short-term C.D. investments.

How many grants are made each year?
The number and dollar amount of grants made each year depends on the donations received that year.

How can I learn more about how CART is structured and governed?