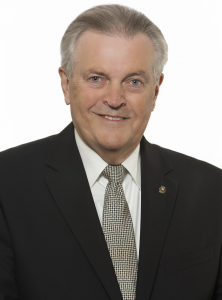 August 7 – It is with a heavy heart tonight that I inform you that a true Rotarian in every sense of the word has passed.  Arnold King passed away earlier this afternoon at Beacon Place Hospice in Greensboro.

A native of Winston-Salem, Arnold grew up in the Mineral Springs area, and attended Mineral Springs High School (Class of 1963), where he captained the men’s basketball team and garnered All-Conference and All-Northwest North Carolina honors while playing for legendary coach Gray Cartwright.

A 1967 graduate of Wake Forest University, Arnold served in the United States Army from 1968-1970. His professional life included careers in the trucking industry, non-profit fundraising, and commercial real estate, as well as owning and operating golf, trophy and beach music shops in downtown Kernersville.

Arnold’s hobbies were equally diverse. An avid rabbit hunter, he also enjoyed Wake Forest sports, beach music, and shag dancing.  His talent as a dancer resulted in his induction into the Beach Shaggers National Hall of Fame in 2014, as well as numerous other shag dancing recognitions.

A member of the Winston-Salem/Forsyth County Planning Board from 2000-2019 (Chairman from 2003-2019), Arnold maintained perfect attendance throughout his service on the board, attending more than 400 public hearings and meetings without an absence.  In recognition of this remarkable record of leadership and service, earlier this year, the Winston-Salem City Council and Forsyth County Commissioners renamed the Planning Board’s meeting room in his honor.

Arnold’s love for Kernersville started as a young boy while spending summers on the Sear’s Family Farm, helping in the tobacco fields, and hunting with his uncles.

It was, however, the civic life of his adopted hometown of Kernersville where Arnold’s impact was most deeply felt.  It is nearly impossible to identify a part of Kernersville’s business and civic life left untouched by Arnold’s remarkable ability to motivate and lead people to do great things.

The civic organization closest to Arnold’s heart was undoubtedly his beloved Rotary Club of Kernersville.  A charter member of the club, Arnold served as its President from 1990-1991, and again from 2017-2018, making him one of only two individuals to serve multiple terms as the club’s President. In typical fashion, Arnold maintained perfect attendance as a Rotarian, from the club’s founding in 1987 until his death, even joining the club’s meetings by live video feed once his health no longer allowed him to attend in person. Arnold went on to serve as District Governor of Rotary District 7690 and General Chairman of the Rotary Foundation for District 7690. In 1997, he was honored as Kernersville’s “Rotarian of the Decade”, and the same year, was recognized with a Rotary Foundation Citation for Meritorious Service.  An outstanding example of Rotary’s motto of “Service Above Self”, Arnold truly believed in Rotary’s ability to make a difference in the community and the world.

In recognition of his years of leadership and service to the community, in 2015, Governor Pat McCrory honored Arnold with the Order of the Long Leaf Pine, the highest recognition a North Carolina Governor can bestow upon a citizen.  The Kernersville Chamber of Commerce recognized Arnold with nearly all of its major awards over the years, including Citizen of the Year, Small Business Advocate of the Year, its Economic Development Award, and its Community Distinguished Service Award, which the Chamber recently renamed in his honor. Additionally, Arnold was honored as the 2015-2016 Cash Elementary School Volunteer of the Year, and was recognized with the Duke Energy Citizenship and Service Award, as well as the Kernersville Parks & Recreation “Mae Kaney Service Award”.  In 2016, Arnold was recognized as one of Spark Magazine/Senior Service’s “7 Over 70” honorees.

Despite all of his involvement, and all the honors and awards he received, Arnold’s most lasting legacy may be his impact on the lives of the many youth and adults he mentored.  From the dozens of students he, as part of the Rotary Club’s “Study Buddy” program at Cash Elementary, to a whole generation of Kernersville civic and business leaders, Arnold leaves behind an untold number of individuals who will forever carry with them the lessons he imparted about leadership, hard work, doing things the right way, dreaming big, and making a difference in your community.

In lieu of flowers, the family requests that memorial contributions be made to the Kernersville Foundation, with a designation for the Arnold G. King Permanent Fund, P.O. Box 921, Kernersville, NC  27285-0921, or a charity of the donor’s choice.

A private graveside service will be held at 11:00 a.m. Saturday, August 10, 2019 at Forsyth Memorial Park for family and friends, with Dr. Pete Kunkle officiating.  The family will receive friends from 5:00 p.m. – 8:00 p.m., Friday, August 9, at First Christian Church in Kernersville. A reception will be held Saturday from 1:00 – 3:00 PM at Paul J. Ciener Botanical Garden, 215 South Main Street, Kernersville, NC 27284, following the graveside service.

Hayworth-Miller Kernersville Chapel is assisting the family with arrangements.